After the Sunset (Full Screen) PG-13

Who will walk away? 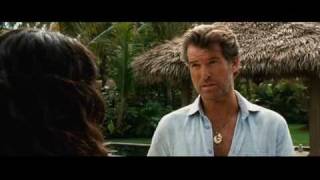 After The Sunset Trailer

Brett Ratner (RUSH HOUR) directed this lighthearted caper starring Pierce Brosnan and Salma Hayek as lovebird jewel thieves. After snatching a huge diamond out from under the nose of FBI agent Stan (Woody Harrelson), the pair retire to the Bahamas to live happily ever after. Yet after a few months, Max (Brosnan) gets bored and starts longing to get back in the game. His chance comes when a cruise ship carrying a large, lovely diamond pulls into port. Lola (Hayek) gets pretty mad when she finds out her man wants to risk it all once again, especially since Stan is in town, determined to redeem his sullied reputation by catching Max in the act. Don Cheadle is the local crime boss who partners with Jack for the heist, or maybe that's a fake-out move to put the feds off the scent. It hardly matters in the long run, as Max and Stan become fast friends, and no diamond can match the beauty of the film's tropical island locale, or its gorgeous lead actress in various swimwear. One gets the sense the cast really had a good time shooting this, and their good vibrations will undoubtedly rub off on the vacation-deprived viewer. Naomie Harris (28 DAYS LATER) plays a major hottie as a local cop who falls for Stan and agrees to help him take the other couple down. The legendary Lalo Schifrin (MISSION IMPOSSIBLE) conducted the pulse-quickening score.

Pierce Brosnan plays a master thief who, after an incredibly successful heist, moves to the Bahamas with his beautiful partner in crime. But the cat and mouse games begins again when an FBI agent, his old nemesis, returns convinced he is going for the biggest score of all, the famous Napoleon diamond.