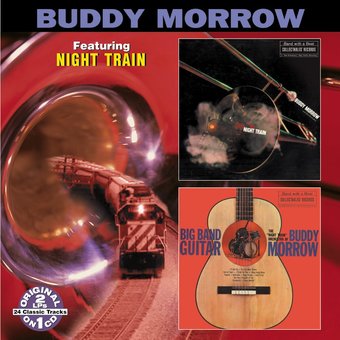 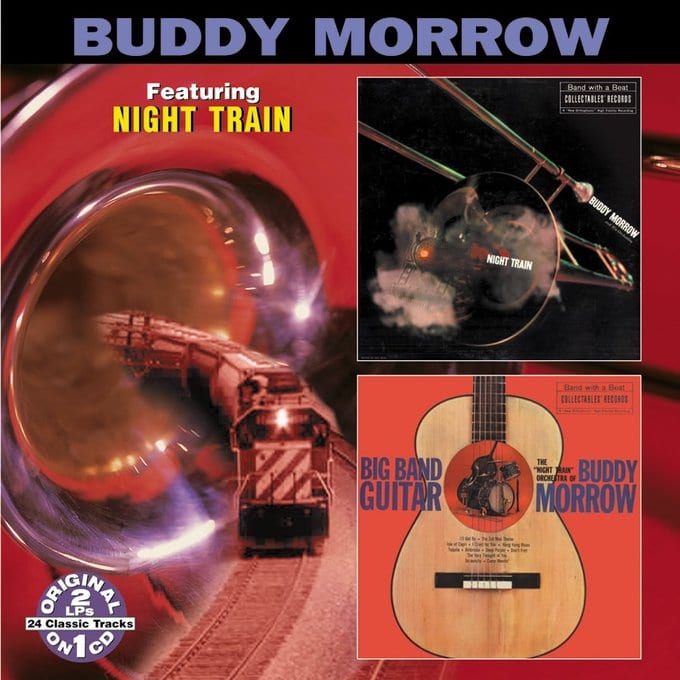 Highlights on these original archival RCA recordings (available for the first time on CD) include "Fine and Mellow," "Deep Purple," and "Hong Kong Blues."

2 LPs on 1 CD: NIGHT TRAIN (1957)/BIG BAND GUITAR (1959).
Originally released on RCA (1427) & RCA (2018).
Personnel: Frankie Lester (vocals).
Liner Note Author: Al Fichera.
Recording information: 08/15/1951-03/03/1959.
With slick, Latin-influenced arrangements of swing classics, Buddy Morrow held on to his love for swing well past the movement's bitter end. In this collection of big band recordings compiled from his two LPs, Night Train and Big Band Guitar, Morrow and his band perfectly typify the late sound of the classically hip big band that is most commonly heard in the swinging pop of Henry Mancini. While Morrow's characteristic trombone leads and the formulaic swing arrangements have a certain undeniable kitsch value, at the time of their making the big band movement had temporally ceased to evolve creatively; considering this, Morrow looks very conservative when compared to his contemporaries in the jazz world. Morrow's occasional vocal efforts ape the swagger of Sinatra, underlying the fact that Morrow was about ten years late of the big trends. The poppy Latin numbers, including "Isle of Capri" and "Hey Mrs. Jones," showcase the band at their best, with a full battery of bongos and Latin clave rhythms backing the full horn section. Juxtaposed with the burlesque wail of "Quarter to Twelve" and "Night Train," Morrow's band proves to be very capable of donning a variety of stylistic hats. Even if the rest of the world had turned their attention to the deconstructionist freedom of bop and left the memories of swing heroes like Benny Goodman and Glenn Miller in the dust, this record is able to prove that at his best, Morrow could swing as hard as any of them. ~ Nate Cavalieri

60%off
Tony Pastor
Rare Tony Pastor & His Orchestra (From The Columbia Vaults) (CD)
$5.98 on Sale
Add to Cart

Buddy Morrow
Dance Date with the Golden Trombone
$12.98 on Sale
Add to Cart