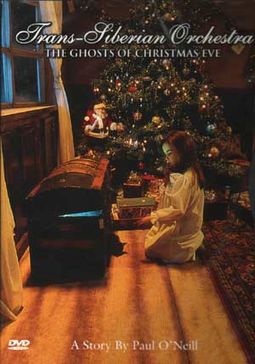 The Ghosts Of Christmas Eve is a timeless holiday story of a young runaway who has broken into an old movie palace, looking for shelter on a snow-filled Christmas Eve. Closed for decades, the building is filled with countless discarded artifacts from the past. There she is discovered by the old caretaker who uses the ghosts and spirits that inhabit this long-abandoned world to turn her life around. This enchanting tale, featuring Ossie Davis, singer/songwriter Jewel, and Boadway superstar Micahel Crawford is highlighted by the performances of Christmas favorites as well as Trans-Siberian Orchestra's own unique arrangements of holiday classics.

A highly original fusion of rock 'n roll, classical music, and Broadway showtunes, TRANS-SIBERIAN ORCHESTRA is led by the award-winning composer and producer Paul O'Neill. A 60-piece orchestra which plays symphonic rock with a concept, TSO has reached audiences of many different genres. THE GHOST OF CHRISTMAS EVE, which is narrated by the actor Ossie Davis and features appearances from Jewel and Michael Crawford--is the fantastic, inspiration tale of a little runaway girl who decides to return to her family.

Trans-Siberian Orchestra
Dreams of Fireflies (On a Christmas Night)
$13.60
Add to Cart