The only movie powered by AC/DC 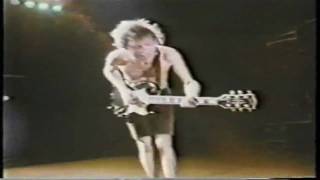 AC/DC Let There Be Rock: The Movie Official Trailer HD

The only movie powered by AC/DC. This legendary concert film, covering a 1979 Paris concert during the Australian heavy metal band's "Highway To Hell" tour showcases the power and precision that the quintet bring to vicious rockers like "Whole Lotta Rosie" and "Let There Be Rock." Pixieish lead guitarist Angus Young, attired in his trademark school-boy's uniform, takes center stage with his energetic antics and frenetic solos, while the rest of the band crank out their minimalist boogie with quiet determination. Interview segments and humorous backstage footage show another side to the thuggish musicians, especially AC/DC's flamboyant lead singer Bon Scott, who died two months after this filmed concert.

Steve Vai
Where the Wild Things Are
$20.40 Super Savings
Add to Cart

60%off
Phil Collins
Going Back: Live at Roseland Ballroom, NYC (DVD)
$3.98 on Sale
Add to Cart