Jr. Walker & The All Stars Shotgun

Mojo (Publisher): 4 stars out of 5 - "A mix of gritty blues instrumentals, R&B jazz workouts and rough, unruly vocal cuts, it made the US R&B chart top spot with no problem."c

Get email alerts for Jr. Walker & The All Stars
8 ratings
Out of Print: Future availability is unknown
Notify Me When Available
Add to Wishlist
Format:  CD
item number:  66GGY
Our customers love us! 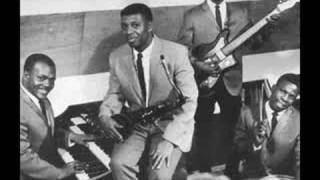 jr. walker and the all stars - shoot your shot (Music Video)

Personnel includes: Junior Walker (vocals, saxophone); Willie Woods (guitar); Vic Thomas (keyboards); James Graves (drums).
While Motown became the pioneering soul crossover label of all time, Junior Walker and the All-Stars maintained their roots in gutbucket funk. Every bit the equal of their southern brethren Booker T. and the MGs, Junior Walker and the All-Stars also had the secret weapon of Walker's voice, a gravelly shout that was as distinctive and soulful as his sterling tenor sax playing. According to legend, Walker's takeover of vocal duties was an accident, but his appealingly raspy voice is such a perfect fit for dance tracks like "Shoot Your Shot" that it's impossible to imagine anyone else singing them. Organist Victor Thomas and ultra-funky rhythm guitarist Willie Woods are SHOTGUN's other MVPs, as integral to the rhythmic drive of grooves like the jazzy "Cleo's Back" as drummer James Graves. The album's hidden gem, however, is the overlooked "I'm A Roadrunner," a Holland/Dozier/Holland effort that exhibits the powerful immediacy of their Temptations classics.

Hot
The Dramatics
The Ultimate Collection (CD)
$11.98 on Sale
Add to Cart