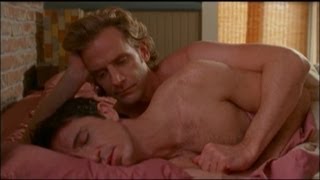 When Adam (Craig Chester, also the film's writer and director) and Steve (Malcolm Gets of TV's CAROLINE IN THE CITY) first meet in the 1980s, Adam is a full-fledged Goth, all eyeliner and morbid posturing, while Steve is a sparkle-covered disco queen. Even so, the two are magnetically drawn to each other, and Steve offers Adam his very first dose of cocaine. Cut to seventeen years later. Adam, now a recovered cocaine addict, finds himself in an emergency room with his beloved pet dog, whom he has accidentally stabbed. As fate (and movie logic) would have it, Steve is the doctor assigned to treat him. Though they don't initially remember one another, the magnetic pull has remained, and the two find themselves building a relationship. Meanwhile, Adam's best friend Rhonda (the always delightful indie queen Parker Posey), dumpy and obese in high school, who has transformed herself into a stylish and thin stand-up comic, begins a relationship with Steve's straight housemate, Michael (former Saturday Night Live regular Chris Kattan).

The road to lasting love is, of course, filled with potholes. Misunderstandings, strange relatives, fear, and doubt all crystallize into dramatic plot points, both humorous and serious. One of the most hysterical scenes occurs the first time Steve dines with Adam's family, a group of accident-prone Jews, each of whom is nursing a different injury. All four leads are charming, and choreographed dance sequences delight with their modernization of a classic generic style.

There's Something About Mary (Blu-ray)
$8.40 Super Savings
Add to Cart