Get email alerts for Heaven & Hell
14 ratings
Currently Out of Stock: We'll get more as soon as possible
Notify Me When Available
Add to Wishlist
Format:  CD
item number:  ZJUX 50462
Our customers love us! 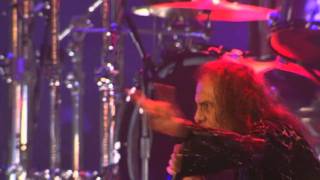 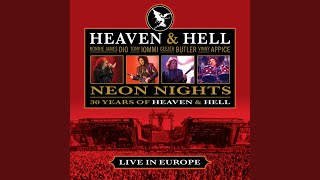 Personnel: Ronnie James Dio (vocals); Tony Iommi (guitar); Scott Warren (keyboards); Vinny Appice (drums).
Liner Note Author: Malcolm Dome.
When Heaven & Hell took the stage on the evening of July 30, 2009 at the Wacken Open Air Festival, it was incomprehensible that this was to be the group's final tour. The band had just issued a brand-new studio album, The Devil You Know, that had hit the U.S. Top Ten, and fans were flocking to stadium-sized festival performances by the band. However, this did indeed prove to be the group's last-ever tour, as Ronnie James Dio would pass away from stomach cancer in May 2010. A little over a year from when the aforementioned show took place comes a live CD that documents this very same performance, entitled Neon Nights. Also issued as a DVD, the Neon Nights CD includes two fewer tracks than the DVD (one of which is just a prerecorded bit, "E5150," while the other is the rarely performed "Country Girl"). And from the sound of the band, it's clear that Heaven & Hell were in fine form right up until the end. Wisely, the majority of the track listing here is comprised of renditions of songs from Black Sabbath's first two classic albums with Dio (1980's Heaven and Hell and 1981's The Mob Rules), including "Mob Rules," the oft-overlooked "Falling Off the Edge of the World," a nearly 20-minute (!) version of "Heaven and Hell," and "Neon Knights." And rounding out the set are renditions of songs from the 1992 Dio-Sabbath release Dehumanizer ("I") and the aforementioned The Devil You Know ("Bible Black"). Without a doubt, both the CD and DVD versions of Neon Nights are fitting farewells to one of the greatest heavy metal lineups of all time. ~ Greg Prato


Call them BLACK Sabbath or Heaven and Hell, this is one of heavy metals best band. This cd rocks from the first song to the last. DIO left us way to early, but he left a lot of great music.