From Here to Eternity

Pouring out of impassioned pages...brawling their way to greatness on the screen! 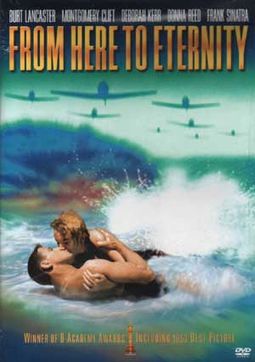 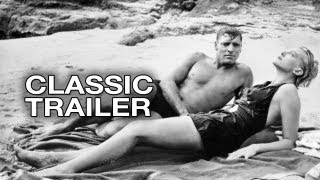 "I never knew it could be like this."
- Deborah Kerr to Burt Lancaster, on the beach

In this landmark film, passion and tragedy collide on a military base as a fateful day in December 1941 draws near. Private Prewitt (Montgomery Clift from A Place In The Sun) is a soldier and former boxer being manipulated by his superior and peers. His friend Maggio (Frank Sinatra from The Man With The Golden Arm) tries to help him but has his own troubles. Sergeant Warden (Burt Lancaster from Elmer Gantry) and Karen Holmes (Deborah Kerr from Separate Tables) tread on dangerous ground as lovers in an illicit affair. Each of their lives will be changed when their stories culminate in the Japanese attack on Pearl Harbor.

An all-star cast brought what was considered an unfilmable novel to the screen with skill and grace with this story of the loves, hopes, and dreams of those in a close-knit Army barracks in Hawaii shortly before the attack on Pearl Harbor. Montgomery Clift portrays a former boxer who refuses to fight after blinding a friend in the ring and is sent to the remote outpost as punishment for his insubordination. Love and tragedy abound in this unflattering look at military life and American thought before the war. Director Fred Zinneman's Oscar-winning film is based on the novel by James Jones.

Customer Rating:
Based on 62550 ratings.


This is one of my favorite world war II movies. I don't like war movies,but this is one of the best. Burt Lancaster is a fine actor. And I also like "old blues eyes" himself. He was excellent as " Magio". There's alot of rising stars in this movie. I have the movie,and I watch it over and over again. Check it out. I think you you will enjoy it.