Independent cabbie Matt Nolan is primed to let his fists and handgun deliver payback after a big taxi firm uses intimidation and violence to squeeze out small-timers. 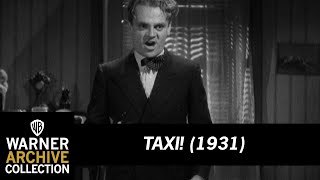 "Come out and take it, you dirty yellow-bellied rat...." Independent cabbie Matt Nolan is primed to let his fists and handgun deliver payback after a big taxi firm uses intimidation and violence to squeeze out small-timers. James Cagney plays Nolan, a role suited to his pugnacious, post-The Public Enemy persona. Ramming rival cabs that have hemmed him into a too-tight parking spot, slugging the hoofer (George Raft) who bested him in a dance contest, tracking down the killer of his brother, Cagney shows why he was the era's "terrier of the screen" (Mordaunt Hall, The New York Times). Loretta Young costars as the femme who tries to tame Nolan.

A huge box office success and a key film in James Cagney's rise to stardom, this drama stars Cagney as Matt Nolan, a gritty New York City cab driver who is being squeezed by a monopolistic taxi trust which uses force to run him and other independent cabbies away from the most profitable locations. Nolan joins forces with Pop Riley (George Kibbee), whose cab is smashed by a truck when he refuses to cooperate with the syndicate. Kibbee is sent to prison for shooting at the truck driver. Nolan is dating his daughter, Sue (Loretta Young), and they enter a Peabody dance contest at a local nightclub. Cagney dances on screen for the first time, and so does George Raft as Willie Kenny, another dancing tough guy who was a friend of Cagney's, who pushed Warner Bros. to give Cagney the role. Nolan marries Sue Riley, and she tries to get him to cool down. But the taxi trust goons kill his brother Danny (Ray Cooke), and Nolan goes on a rampage. In several filmed gun battles, live machine-gun bullets are used, as they were in Cagney's famed THE PUBLIC ENEMY. This is the last time Cagney allowed that.

Adventure | Rivalry | Dance | Melodrama | Crime | News | Ireland | Brothers | Dancing | Competitions | Weapons
This product is made-on-demand by the manufacturer using DVD-R recordable media. Almost all DVD players can play DVD-Rs (except for some older models made before 2000) - please consult your owner's manual for formats compatible with your player. These DVD-Rs may not play on all computers or DVD player/recorders. To address this, the manufacturer recommends viewing this product on a DVD player that does not have recording capability.

Customer Rating:
Based on 1361 ratings.


James Cagney is my all time favorite actor and this film will explain why! Voted in the Jewish Movie Hall Of Fame, Cagney speaks Yiddish, dances with Loretta Young against George Raft, dodges real life bullets and actually says "you yellow dirty bellied rat!" This film was a box office smash when it was released in the early part of 1932 for i have seen over a hundred times and I never get tired of it! Loretta Young had said of Cagney that during the making of this film, she had a romantic dream of Cagney saving her from drowning on the beach! Believe me, a lot of women felt the same about him, so if you want to watch a very entertaining movie with romance and action, you can hail a "Taxi!"