A love triangle with murder at its heart, an atmospheric film noir of looming shadows, fatal romance and a trench-coated killer. Bogart portrays Richard Mason, married to Katherine (Hobart)...but in love with her sister (Alexis Smith). 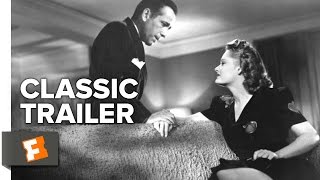 Conflict is a love triangle with murder at its heart, an atmospheric film noir of rainy nights, looming shadows, fatal romance and a trench-coated killer that walks out of the mist -- all directed by Curtis Bernhardt, a filmmaker skilled in the Expressionistic style of his native Germany. The story embraces the perfect noir topic: the almost-perfect crime. Humphrey Bogart portrays Richard Mason, married to nagging Katherine (Rose Hobart)...but in love with her sunny sister (Alexis Smith). Shortly after a fifth-year wedding celebration at the home of a friend (Sydney Greenstreet), Richard decides to remove the obstacle to his happiness. He kills Katherine, carefully leaving no evidence of his guilt. Or at least he thinks he killed her -- until mysterious events cause Richard to fear Katherine is very much alive.

Bogart plays a man who kills the wife who won't divorce him when his affection turns to her younger sister. But with her body missing, her perfume in the air, a glimpse of her on the street, he starts to wonder if she's really dead after all. A good psychological thriller.

Richard Mason is married to Kathryn, but is in love with her sister Evelyn. So he kills his wife, pulling off what he believes is the perfect crime. Unfortunately for the murderer, at least one person suspects the truth: psychologist Mark Hamilton, who decides to plant evidence and stage events to make Richard suspect that his wife is still alive.
Will Richard fall for these tricks and incriminate himself'

Family Interaction | Mystery | Justice | Suspense | Thriller | Murder
This product is made-on-demand by the manufacturer using DVD-R recordable media. Almost all DVD players can play DVD-Rs (except for some older models made before 2000) - please consult your owner's manual for formats compatible with your player. These DVD-Rs may not play on all computers or DVD player/recorders. To address this, the manufacturer recommends viewing this product on a DVD player that does not have recording capability.