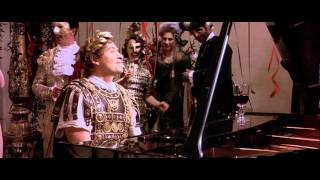 Directed by Irwin Winkler, DE-LOVELY depicts the life of the great American composer Cole Porter (Kevin Kline). Despite his sexual preference for men, Porter found inspiration and virtually unconditional love with Linda Lee (Ashley Judd). Told in flashback as Porter is near death, the film follows the Porters' fabulous, unconventional relationship from their meeting in Paris to their subsequent moves to Venice, New York, Hollywood, and Williamstown, as well as the many stops along the way. Kline perfectly captures the Porters' zest for life and seemingly inexhaustible need for love. Classic tunes such as "Let's Do It, Let's Fall in Love," "Let's Misbehave," and "Anything Goes" take on whole new meanings when considered in the context of Porter and Lee's life together. Contemporary musical performers, including Alanis Morissette, Natalie Cole, Robbie Williams, Elvis Costello, and Sheryl Crow, appear in the film singing Porter standards, a device that works surprisingly well. Judd holds her own as the devoted Linda, who gives her love to Porter and supports his musical ambitions while trying to overlook his homosexual affairs. Historians may debate the details of the Porters' relationship, but one thing is clear: DE-LOVELY dazzles with great music, period costumes, and fine performances.

Beyond the Sea
$12.80 Super Savings
Add to Cart