It speaks to you in the language of love, laughter and tears!... 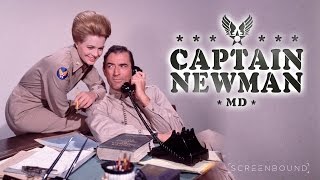 Sensitive drama in the story of a WW II doctor treating the mental scars of his soldier patients, and light comedy in his dealings with army bureaucracy, in the medical pranks that keep the hospital staff sane, and in a little romance, too. Peck manages the balancing act. Adapted from the novel by Leo Rosten, this was the last screenwriting credit for Phoebe and Henry Ephron, parents of writer/directors Nora and Delia.

An army doctor cares for a variety of patients, all of whom are traumatized by their wartime experiences. Sometimes military rules and regulations get in the way of his work -- but Doctor Newman isn't about to let that stop him from doing what he must to help his men recover.
It's not all work and no play, however, for the good doctor enjoys the pranks of a high-spirited orderly, as well as a romance with a kind and lovely nurse.

The Private War of Major Benson
$14.50
Add to Cart

The Great Impostor
$19
Add to Cart