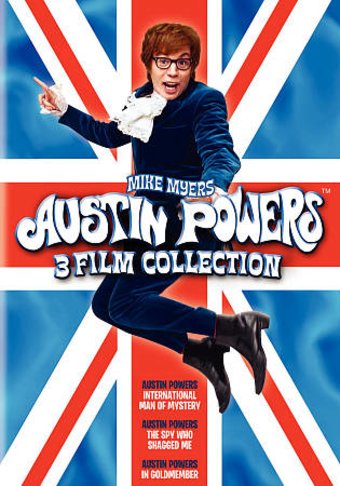 AUSTIN POWERS: INTERNATIONAL MAN OF MYSTERY: The dastardly doings of Dr. Evil lead to his escape into outer space and the cryogenic freezing of super-agent Austin Powers. Thirty years later Dr. Evil returns to earth to bring about terror and mass destruction but finds his ideas and methods a bit out of date. So too does our hero who upon being thawed out, finds he's a bit behind the times as well. Well meaning and bumbling efforts to thwart the insidious Dr. Evil keep Austin and his devastatingly beautiful partner Vanessa busy from London to Las Vegas. Freedom in the '90s, baby! A hilarious send up of James Bond spy films and 1960s schtick.

AUSTIN POWERS: THE SPY WHO SHAGGED ME: In his second screen adventure, British super-spy Austin Powers must return to 1969, as arch-nemisis Dr. Evil has ventured back to that year and successfully stolen Austin's "mojo" (libido!) and set up an ultra-powerful cannon and aimed it at the Earth. With the help of gorgeous agent Felicity Shagwell, the newly single Austin must now not only contend with Dr. Evil, but also Evil's vicious, pint-size attack-clone, Mini-Me. Also in this installment, Evil's son, Scott, finds out who his mother is and Mike Myers stars as a third character, rotund Scotsman Fat Bastard. More raucous fun in the spirit of its 1997 smash predecessor.