Miracle of Our Lady of Fatima

Warner Bros. present the motion picture that reaches deep inside you! 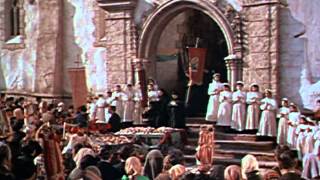 Miracle of Our Lady Fatima - Trailer

Each year Christian believers from around the world throng the Portuguese village of Fatima. Here they worship God - and remember the children who first heralded The Miracle of Our Lady of Fatima. This much-loved movie thoughtfully recreates the 1917 events that brought hope and new religious fervor to a war-ravaged world. Three peasant youths see a vision: a woman in a cloud of light offering words of faith and prophecy. They face skepticism and torture - but are soon embraced by faithful masses drawn by the promise of a miracle. Director John Brahm skillfully balances simplicity and spectacle, all powerfully supported by Max Steiner's Oscar-nominated score. As the New York Journal-American observed, the movie "lights up the screen like a ray of sunshine."

This story recreates the events that began in May 1917, when three shepherd children witness a vision of a beautiful lady in a grotto just outside the village of Fatima, Portugal. At a time when World War I rages across Central Europe and Portugal is locked in the grip of a repressive, anti-religious government, their report ignites the religious fervor of the villagers--and foreshadows a dangerous confrontation with government officials. Academy Award Nominations: Best Scoring of a Dramatic or Comedy Picture.

Miracle of Our Lady Fatima
Screen chronicle based on actual 1917 events outside Fatima, Portugal, where three shepherd children report visions of the Virgin Mary and confront anticlerical government oppression in the process.

A reverent exposition of the famous appearance by the Virgin Mary to a trio of Catholic children in Fatima, Portugal. The three encounter a vision of the Holy Mother, who promises them that she will soon return. The Catholic Church, fearful that the story will not be believed, tries to hush things up. But the children have been promised a miracle that will make all believe.

16%off
Song of Bernadette
$8.40 Super Savings
Add to Cart

Customer Rating:
Based on 1242 ratings.


I like this movie, but not for the reasons you would expect. I think it is one of the best unintentional comedies ever made. The story line is beyone sappy, the children as unbelievable as the miracles and the McCarthyite subplot is so bad as to be hilarious.

The best scene is a very brief one, if you blink you'll miss it, of a panicked woman fleeing from the falling sun screaming her lungs out.

Buy this for a good laugh whenever you need it.