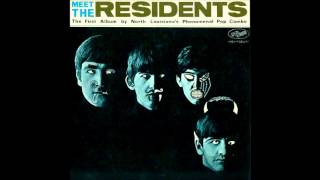 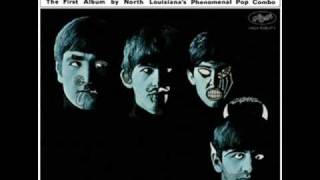 Includes the entire SANTA DOG EP as bonus tracks.
Personnel: Pamela Wieking (vocals); James Aaron (guitar); James Whitaker (piano).
Photographer: Robert Freeman.
Arranger: The Residents.
The Residents' 1972 debut album featured a cover that defaced The Beatles' first long-player. A banner across the top announced their arrival from "North Louisiana," but they sounded like they could have come from a parallel galaxy. The fragmented songs sound like they'd been listening in to Earth radio programs from some outpost in outer space, with delicious, disorienting results that tickle, confuse, and challenge the unassuming listener's ear.
Though they later evolved into cunning exponents of the non-clich‚d possibilities of electronic instruments, this album finds them using primarily acoustic instruments, often distorted or treated through extreme effects. Their songs are partly cinematic landscapes and partly pop music blown through a wood chipper. Their identities were hidden behind mutated Beatles imagery, listed as Paul McCrawfish, John Crawfish, George Crawfish, and Ringo Starfish. And though those names never appeared on any of their albums again, they have never revealed their identities. MEET THE RESIDENTS was the opening salvo for these legendary, brilliant avant-garde oddballs.

The Residents
The Commercial Album
$12.30 Super Savings
Add to Cart

The Residents
Not Available
$12.30 Super Savings
Add to Cart