To Wong Foo, Thanks for Everything! Julie Newmar PG-13 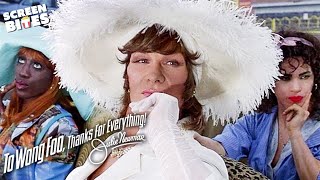 "When a straight man puts on a dress and gets his sexual kicks, he is a transvestite. When a man is a woman trapped in a man's body, and has a little operation, he is a transsexual. When a gay man has WAY too much fashion sense for one gender, he is a drag queen."
- Noxeema Jackson (WESLEY SNIPES) to Chi Chi Rodriguez (JOHN LEGUIZAMO).
"We gotta make moments fabulous. Because no sooner is a moment noticed than it is gone, child. And a life ain't something to be avoided."
- Noxeema Jackson (WESLEY SNIPES)
"Ready or not, here comes mama."
- Vida Boheme (PATRICK SWAYZE)

Three New York drag queens on the way to Hollywood for a beauty pageant have their car break down in a small Midwestern town, stranding the flamboyant trio for the weekend. Waiting for parts for their Cadillac convertible, the "ladies" show the locals that appearing different doesn't mean they don't have humanity in common.

Boys will be girls: three outrageous (but loveable) drag queens -- fierce Noxeema, sensitive Vida, and dreamer Chi Chi -- set out from New York to Hollywood in their 1967 Cadillac convertible. In addition to their eye-popping wardrobes, the divas pack a good luck charm, an autographed photo of TV's "Catwoman", Julie Newmar. But when the Caddy breaks down in Snydersville, the mother of all hick towns, the trio decides to stay for the weekend. While there, the threesome (mistaken for actual women) become enmeshed in many of the citizens' problems, ranging from spousal abuse to romantic heartache. They even teach some of the surly males to lighten up on the machismo thing. But when the fetching femmes are revealed to be gay guys, how will the town react'