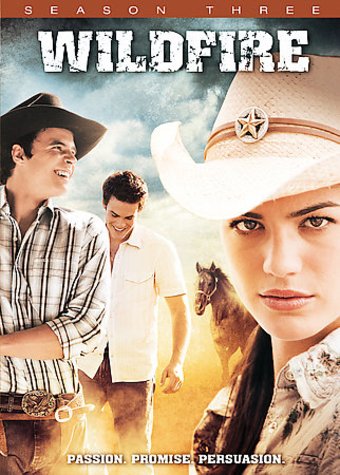 WILDFIRE tells the story of troubled teen Kris Furillo (Genevieve Cortese), who winds up working on the Raintree Ranch when a local trainer (Greg Serano) by chance notices her innate touch with horses. As she works to learn the ropes and earn the trust of her newfound employers, ranch owner Henry Ritter (Dennis Weaver) and his daughter, Jean (Nana Visitor), struggle to keep the farm, which is in dire financial straits. In the third season, Kris is once again torn between Junior and Matt after a devastating betrayal and an unexpected offer of a helping hand that may not be enough to save Raintree Ranch from its worrisome financial situation. Included in this set are all 13 episodes from WILDFIRE's third and penultimate season.

Kris Furillo (Genevieve Cortese) finished serving time at a juvenile detention center for grand theft auto and resisting arrest. Upon her release, she is offered a job at the Ritter's family ranch after Pablo Betart (Greg Serano), a center volunteer who teaches inmates to ride horses, notices Kris' unusual talent with the animals, especially the horse Wildfire, with whom she has bonded. In Season 3, Kris hopes to save Raintree Ranch from devastating financial news, but the rivalry between Raintree and Davis farms intensifies as they fight to save themselves. And a cruel betrayal leads Kris to reconsider her romantic relationship with Junior (Ryan Sypek).Meanwhile, Matt (Micah Alberti) steps in and lends her support leaving Kris once again torn. With two great guys to turn to she is forced to make a decision. Who will she choose' Continue your collection with all 13 episodes of Season 3, complete exclusive bonus material including audio commentaries with cast and crew.