The Vandals The Quickening 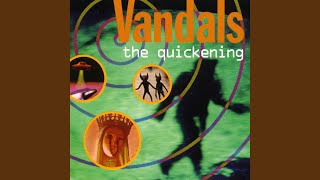 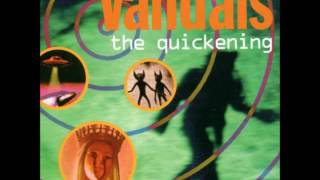 The Vandals - It's A Fact (Music Video)

Melody Maker (8/24/96, p.41) - "...Forget Offspring's dire MTV angst and sub-Nirvana riffs; this is what you should be listening to: breakneck beats and freak humour, each song as tuneful as anything that Brian Wilson could come up with..."
Personnel: Warren Fitzgerald (vocals, guitar); Dave Quackenbush (vocals); Josh Freese (drums); Chris Lagerborg (background vocals).
Audio Mixer: Mike Melnick.
Recording information: Formula 1 (1996); Front Page (1996); Paramount (1996); Planet Of The Tapes (1996).
Photographer: Joe Escalante.
The Quickening is as definitive as the Vandals get. Amidst the scabrous lyrics (such as the mock-cannibalistic "Hungry for You," which parodies the starving musician anthem in a rather unusual way) and the loud and fast punk attitude, there are actually some intriguing ideas and clever melodies. Part of that is due to the musicianship; drummer Josh Freese and bassist Joe Escalante are an especially astute rhythm section. Mostly, though, the band simply constructs some ingenious music melodies ("Hungry for You" is an homage to '60s garage rock) and overlays lyrics that tone down the gross out humor and silly goofiness of previous albums. The hilarious "Choose Your Masters" argues that, contrary to what Choose or Lose claims, fans who watch MTV should not be allowed to vote, while "Canine Euthanasia" is a surprisingly touching ode to a beloved pet that had to be put down. The Quickening contains no shortage of silly humor, but tempers it with just the right amount of reflection, which guarantees that this will be considered one of the best Vandals albums. ~ Victor W. Valdivia

The Vandals
Look What I Almost Stepped In... (Translucent Green Vinyl)
$20
Add to Cart

The Vandals
I Saw Her In A Mustang
$17.10 Super Savings
Add to Cart