Love is a force of nature 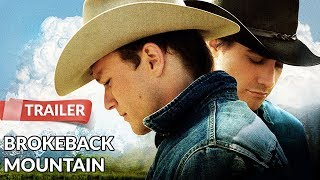 Based on the short story by Pulitzer Prize-winning author E. Annie Proulx, BROKEBACK MOUNTAIN is the tragic and moving story of two cowboys who unexpectedly fall in love while working together one summer in 1963. When the film begins, rodeo cowboy Jack Twist (Jake Gyllenhaal) and ranch-hand Ennis Del Mar (Heath Ledger) are strangers meeting for the first time. As the more outgoing one, it is Jack who must initiate a friendship with Ennis, a man so tight-lipped and self-consciously macho he refuses all facial expression. From this strained beginning, Jack and Ennis gradually begin to bond on cold, lonely nights over a fire in the mountains of Signal, Wyoming. One particularly chilly evening, Jack invites Ennis into his tent, where a sudden awkward embrace sends their relationship in a new direction. Though each man stubbornly defends his heterosexuality, the spark between them cannot help but grow, with that initial summer on Brokeback Mountain becoming their reference point for happiness during the rest of their lives.

Spanning 20 years, the film moves at an impressively slow pace that really captures the detailed and unhurried style of Proulx's story. Seeing each other a few times a year at best, Ennis and Jack spend the rest of their time halfheartedly living up to society's expectations by marrying and having kids. When the lovers do meet, there is a sense of love so palpable and frustrating it often manifests itself in physical violence. Gyllenhaal shines as the film's hopeful light, and Ledger gives a powerful performance as the emotionally blocked Ennis. Academy Award-winning director Ang Lee captures the natural beauty of Wyoming and Texas with camerawork that, while beautiful, never feels imposing. Gustavo Santaolalla's simple yet haunting score helps to complete a beautiful portrait of wasted chances and regret.