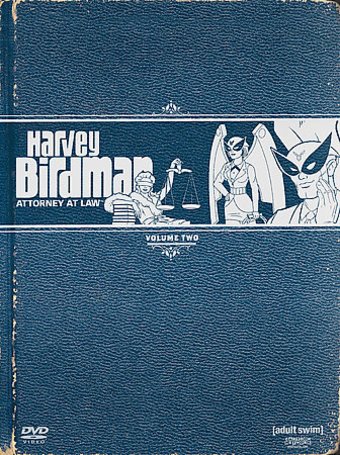 27 ratings
Out of Print: Future availability is unknown
Notify Me When Available
Add to Wishlist
Format:  DVD  (2 Discs)
item number:  HQC9
91% recommend us!

Disc 2: "Harvey's Civvy," "X Gets The Crest," "Birdgirl of Guantanamole," "Beyond the Valley of the Dinosaurs," "Evolutionary War"

Before settling into the ATTORNEY AT LAW format, Harvey Birdman bounced around a few other shows, with appearances on BIRDMAN AND THE GALAXY TRIO and as potential host for COAST TO COAST before Space Ghost snuck in. (Both feature prominently on his resume). Harvey is one of the most popular characters spawned by the Cartoon Network's Adult Swim section. His career as a failed superhero over, Birdman tries his hand at law, with similarly mixed results. His clients include a wide range of characters from the Hanna-Barbera stable, all of whom come to Harvey despite his lack of credentials in the field of law. The show's cult following will be delighted to see this collection of episodes, and animation fans looking for an offbeat treat should look no further than HARVEY BIRDMAN: ATTORNEY AT LAW.