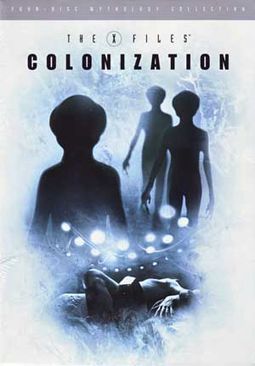 Chris Carter's wildly popular series follows FBI agents Fox Mulder (David Duchovny) and Dana Scully (Gillian Anderson) on top-secret assignments to investigate all manner of paranormal activity. The show--which blended science fiction, horror, and comedy--ran for nine seasons. Fraught with tension (sexual and otherwise), the relationship between the two partners divides along lines of belief: Mulder puts stock in tales of aliens, even believing that he had been abducted, while levelheaded Scully is a doctor and a pragmatist. Various themes run throughout the X-Files series, with multiple strands of mythology taking shape over time; the episodes collected here form one such myth, that of alien presence. Tables are turned in "Patient X" and "Red and Black," when a woman who thinks she has been abducted by aliens has Scully under her spell, while Mulder thinks it's a government conspiracy. When the woman disappears, Mulder gets blamed for it. "The End" sees the return of the Cigarette Smoking Man, who gives Mulder an important piece of information, while in "The Beginning," the intrepid pair face their refused reassignment to the X-Files, though, even without the backing of their department, they continue their work. Sixteen episodes weave together an intricate tale of intrigue and aliens in this thoughtful selection.