The Wings of Eagles

THE SKY IS THE LIMIT for Fun, Thrills, Excitement! 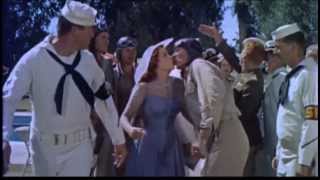 John Ford's biopic of his friend Frank "Spig" Wead stars John Wayne as the decorated naval hero who went on to become the screenwriter of such films as Ford's THEY WERE EXPENDABLE and Howard Hawks's CEILING ZERO. After World War I, Frank strives to demonstrate the potential of seaplanes for use in warfare to the navy by winning a number of competitions. As the pilot's star rises, he spends time working and indulging in adolescent horseplay with his buddies while his wife, Minnie (Maureen O'Hara), languishes at home with the children that Frank barely knows. On the night when a much desired assignment to command a fighter squadron finally comes through, the pilot is paralyzed after an accidental fall. Ashamed of his condition, Frank refuses to accept consolation or help from his wife or family and will allow only his military mates, Jughead Carson (Dan Dailey) and John Price (Ken Curtis), to aid his long rehabilitation. After a bout of depression, he begins to write of his experiences, slowly transforming himself into a professional author. THE WINGS OF EAGLES features an endearing mix of low comedy and high drama expertly interwoven by Ford, who also allows a delightful spoof of himself in the form of Ward Bond's hilarious portrayal of a Fordian director named John Dodge.

This biographical film chronicles Commander Frank W. "Spig" Wead's naval history--including his macho adventures, playful hijinks and escapades, and his public relations efforts on behalf of the armed services--while also dramatizing the hardships Wead endured after falling down a staircase and injuring his spine.

19%off
They Were Expendable
$12.10 Super Savings
Add to Cart