It’s the story of their lives. 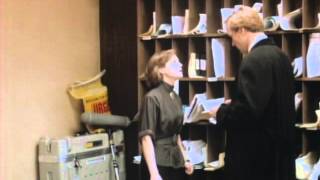 James Brooks directs William Hurt, Holly Hunter and Albert Brooks in this satirical comedy about three ambitious newscasters.
Tom Grunick, a rising anchorman, has plenty of on-camera savvy, personality and good looks but little in the way of brains. He may be dumb as a doornail but Tom's got the star presence his network needs. Then there's Aaron Altman, a less than good-looking newsman, who's dedicated, diligent and down-to-earth. Aaron would love to be an anchor but he freezes up the moment he's in front of the camera. Spunky, smart news producer Jane Craig is excellent at her job but has difficulty handling the pressure. Can these workaholics mask their personal quirks long enough to jump-start their professional lives'