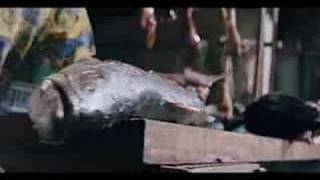 PRIMEVAL is the story of an American news crew sent to Burundi, Africa, by its network chief to hunt and capture the legendary crocodile Gustave, who stalks a local river in search of human prey. The small crew consisting of embattled producer Tim Manfrey (Dominic Purcell), reporter Aviva Masters (Brooke Langton), and their cameraman Steven Johnson (Orlando Jones) are joined by two animal experts: one a Steve Irwin-style croc hunter, the other a local named JoJo.

Gustave's screen time provides some genuine action-packed thrills, thanks to decent CGI work and the creature's absurd size. The movie's violence factor is taken to disturbing new levels, however, when the crew's cameraman films the execution of a tribal shaman and his family at the hands of a local warlord named Little Gustave. From there the movie divides its time between being a gruesome "don't-go-in-the-water"-style horror movie, and an unsettling pop-political treatise on violence and suffering in post-millennial Africa. It is the death of a white aid worker that initially sparks the news channel's interest in Gustave, despite his killing of hundreds of Burundians, and there are disputes throughout the film as to the West's role in the continent's turmoil. It's debatable whether a horror movie about a killer crocodile has any business discussing the complex political state of the war-torn areas of Africa, but the metaphor is more than clear. As much as Gustave may wreak havoc on the people of Burundi--swallowing little children whole and tearing humble fisherman limb from limb--he is nothing compared to the violent warlords who stalk the region and the global apathy that continues to unwittingly aide their presence.