234K ratings
Currently Out of Stock: We'll get more as soon as possible
Notify Me When Available
Add to Wishlist
Format:  DVD
sku:  SKDVD 4921D
Also released as:
Man of the Year for $4.89
Our customers love us! 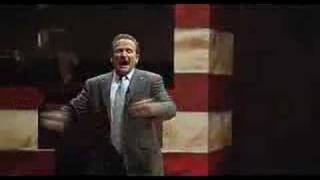 Man Of The Year Trailer

Robin Williams and writer-director Barry Levinson, who worked together on 1987's GOOD MORNING VIETNAM and 1992's TOYS, reunite for the political thriller/romantic comedy MAN OF THE YEAR. Williams stars as Tom Dobbs, the host of a comedy talk show who, fed up with the political system, suddenly decides to run for president. So off he goes on a national bus tour, joined by his manager, Jack Menken (Christopher Walken), and his head writer, Eddie Langston (Lewis Black), bringing his message of change to an eager public. Meanwhile, Eleanor Green (Laura Linney), who works for Delacroy, the company that has developed the voting machines being used by the government, discovers a serious glitch in the program that alters the results of the election. She tries to tell the company's CEO (Rick Roberts) and chief counsel/spokesman (Jeff Goldblum), but they want everything hushed up so their stock prices aren't affected and their upcoming international deal goes through. Unable to hold back the truth, Green looks to Dobbs for help while being hunted down by Delacroy. Levinson, the director of such successful films as DINER, AVALON, and WAG THE DOG--the latter also set in the political arena--has crafted a fast-paced, seriocomic look at 21st-century America, especially since the possible voting problems encountered in the presidential elections of 2000 and 2004. Part Jon Stewart, part Bill Maher, part Ross Perot, Dobbs is a funnyman who decides to do something about the sorry state of the country.