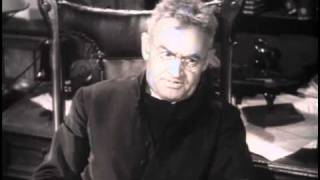 Youthful Father Chuck O'Malley (Bing Crosby) led a colorful life of sports, song, and romance before joining the Roman Catholic clergy, but his level gaze and twinkling eyes make it clear that he knows he made the right choice. After joining a parish, O'Malley's worldly knowledge helps him connect with a gang of kids looking for direction and handle the business details of the church-building fund, winning over his aging, conventional superior (Barry Fitzgerald). Songs such as "Swinging on a Star" sparkle, and both Crosby and Fitzgerald do a fine job tugging at the heartstrings in a gentle, irresistible way that will make viewers return to this lovely film again and again.

The overwhelming popularity of this film upon its release was only heightened by the many Academy Awards it won, and its sequel, THE BELLS OF SAINT MARY'S, starring Crosby and Ingrid Bergman, was released in theaters the next year to eager fans and more awards.

This lovable Leo McCarey picture is a sentimental favorite about a dynamic young priest who adds sparkle to a parish overseen by crusty old priest who could sure use some luster. Crosby single-handedly wins over the local toughs by organizing a football team and bolstering the parish coffers with a little ditty he sells. The whole thing just sings.

Customer Rating:
Based on 16463 ratings.


ALL THE OLD CLASSICS, ARE A TRADITION TO WATCH TURNING THE CHRISTMAS SEASON...
IT ISN'T CHRISTMAS, WITHOUT ALL THESE MOVIES,
PART 1.. GOING MY WAY.
PART 2..BELLS OF ST. MARY
WHITE CHRISTMAS
HOLIDAY INN
COME TO THE STABLES.
IT'S A WONDERFUL LIFE.
LAST HOLIDAY
HOLIDAY AFFAIR.
DONOVAN'S REEF
THE REF
BOYS TOWN
REMEMBER THE NIGHT
CHRISTMAS IN CONNECTICUT
HAPPY HOLIDAYS FROM SINATRA AND CROSBY
CHRISTMAS VACATION WITH CHEVY CHASE
JUST TO NAME A FEW.. THERE ARE STILL SO MANY MORE AND EACH ONE IS A 5 STAR RATING.. TO ME...