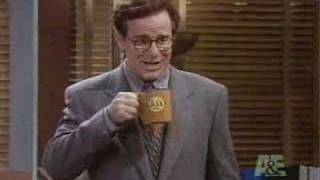 Wacky characters were the strong suit of this of this 1990s sitcom set at WNYX, a news radio station in New York City. Khandi Alexander left the show in the fourth year, and there were major cast changes in the fifth and final season. After the tragic death of Phil Hartman (and his character), a new anchor and actor arrived to replace him. Acerbic SNL veteran Jon Lovitz played the new arrival, who clashed with the established cast of characters that included Dave Foley, Andy Dick, Maura Tierney, and Stephen Root. This release includes every episode of the fifth season, with guest appearances from Patrick Warburton, Adam West, and Tiffani-Amber Thiessen.