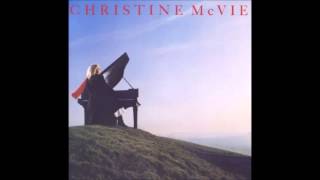 Personnel: Christine McVie (vocals, keyboards, percussion); Todd Sharp (vocals, guitar); George Hawkins (vocals, bass); Steve Ferrone (drums, percussion); Lindsy Buckingham, Eric Clapton, Ray Cooper, Mick Fleetwood, Eddy Quintela, Steve Winwood.
During her years with Fleetwood Mac, Christine McVie only recorded one album. It was released in 1984, after Mirage had run its course and the band was taking an extended break. Given its release date, it's not surprising that Christine McVie sounds like it could have been recorded during the Mirage sessions -- it's a collection of soft rock/pop and ballads that are pleasantly melodic and ingratiating. Only a handful of cuts, such as the wonderfully catchy, lightly bouncy hit single "Got a Hold on Me," work their way into the memory, but nothing on Christine McVie is anything less than agreeable. The record simply suffers from a rather predictable fate -- it's a little too sweet and laid-back to be consumed in one sitting, and its best songs would have sounded even better if they were balanced by Lindsey Buckingham's insular, paranoid pop genius and Stevie Nicks' hippie-folk mysticism. ~ Stephen Thomas Erlewine