What Was Once Trapped, Will Now Be Unleashed 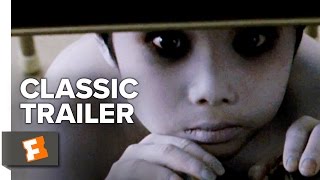 The titular curse expands along with the franchise in the sequel to THE GRUDGE, which itself was a remake of the Japanese original for American audiences. The film has an ensemble cast and an extensive number of subplots that further reflect this tendency towards expansion. The story picks up right where the last one ended, with Karen (Sarah Michelle Gellar, BUFFY THE VAMPIRE SLAYER) in the hospital, the only survivor of an ill-fated encounter with a cursed house. She has not emerged unscathed, however, and it's up to her estranged sister, Aubrey (Amber Tamblyn, JOAN OF ARCADIA), to figure out the mystery behind the strange-goings-on related to the now half-demolished house. In doing so, she teams up with a journalist named Eason (Edison Chen), who has been following the case from the very beginning, and the pair embarks on a trip to the decidedly creepy Japanese countryside, hoping to visit the mother of one of the house's original inhabitants. Meanwhile, three teenage girls who attend a local international high school are haunted with nightmarish encounters, which begin after they venture inside the house to pull a mean prank on the new girl. When one of the girls returns home to Chicago, the curse spreads to her apartment building, where members of a family that have recently acquired an unexpected new stepmother (Jennifer Beals, FLASHDANCE, THE L WORD) violently turn on one another. Symptoms of the curse begin to turn up everywhere, while a horrified Aubrey learns that there is no way to stop it from spreading. Although the film suffers from a diffuse plotline and an unfortunate flashback sequence at the end, the high production values and well-executed special effects ensure a highly satisfying experience for discerning viewers out for a thrill.