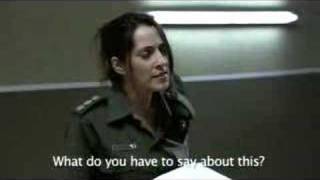 Life as a teenage girl in Israel isn't easy. Just ask Smadar (Smadar Sayar) and Mirit (Naama Schendar), two 18-year-olds who spend their workdays wearing fatigues as officers in the Israeli Army. Vidi Bilu and Dalia Hagar's CLOSE TO HOME addresses the challenging concept of a country in which young women are forced to perform military service amidst the trials and tribulations of teenage confusion. Smadar is a rebellious type who clearly has issues letting people get close to her. Meanwhile, Mirit is as by-the-book as they come. When they're paired together to patrol the streets of Jerusalem and perform random I.D. searches on those who look suspicious (i.e., any and all Arabs), it looks like they're never going to get along. Gradually, they begin to warm up to each other, and a sisterly bond develops. But ultimately the strain of trying to balance personal issues with the stress of being soldiers causes them to rethink their friendship forever. Clearly a subject close to Bilu and Hagar's hearts, CLOSE TO HOME is, at its core, a universal story about budding womanhood. But placed in a military context, the stakes are even higher, and the levels run even deeper. Both Sayar and Schendar deliver superb performances, capturing their characters' constantly shifting emotional states with flawless accuracy.

The Kids Are All Right
$4.89 Spring Sale
Add to Cart

The Kids Are All Right
$4.89 Spring Sale
Add to Cart

73%off
The New Adventures of the Elusive Avengers (DVD)
$7.98 Spring Sale
Add to Cart