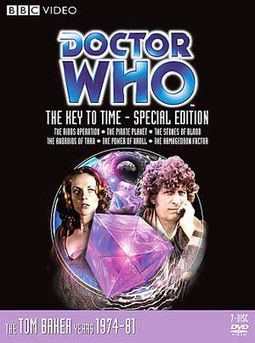 Get email alerts for Doctor Who
18 ratings
Available: Usually ships in 2-4 business days
Only 6 copies left
Add to Cart
Add to Wishlist
Format:  DVD  (7 Discs)
item number:  H2YS
Related products:
Doctor Who - The E-Space Trilogy for $43.40
Doctor Who - Calling the Shots: Directing the New Series of Doctor Who for $13.98
Doctor Who (BFI TV Classics) for $9.98
91% recommend us!

Six feature length volumes comprise the entire search made by the spaceship Tardis for "The Key to Time." The fourth doctor (Tom Baker) is joined by Romana (Mary Tamm) in this search in which they encounter giant squid-like gods, space pirates, and bitter 32-year winters. Episodes included: "The Ribos Operation," "The Pirate Planet," "The Stones of Blood," "The Androids of Tara," "The Power of Kroll," and "The Armageddon Factor."