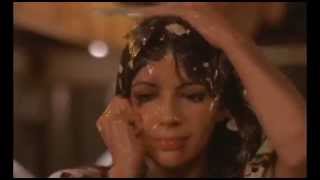 Director Makavejev's controversial SWEET MOVIE actually contains two cult-classic comedic stories. In the first story, Miss World Virginity marries wealthy industrialist Mr. Kapital who has her sterilized, rather than consummating their marriage. She runs off, has an affair and ends up in a commune. In the second story a survivor of the revolution has a sexual encounter with a sailor which ends in his murder in a vat of sugar.

"Sweet Movie" is Dusan Makavejev's avant-garde vision of sexuality, communism, Nazi and Soviet atrocities, bodily functions and sweets - lots and lots of sweets.
Following two parallel plots, the film focuses first on Miss Canada, a virgin who wins a surreal beauty contest to become the wife of multi-billionaire with a golden phallus. The billionaire has her stuffed into a suitcase and shipped to Paris. She loses her virginity to a singer, falls into sexually induced shock, and after a stay with the Otto Muehl group she ultimately finds herself a model being bathed in a vat of chocolate.
The second plot features a captain of a ship bearing the head of Karl Marx on its prow. She makes love to a young sailor in a bed of sugar and kills him, mixing his blood with the sugar.