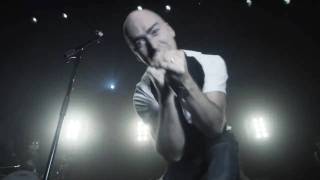 Personnel: Ed Kowalczyk (vocals, background vocals); James Gabbie (guitar); Andy Dollerson (keyboards); Ramy Antoun (drums).
Audio Mixer: CJ Eiriksson.
Recording information: Wire Recording Studios, Austin, TX.
Photographer: Piper Ferguson.
It's certainly possible that the title of Ed Kowalczyk's first solo album is a pun on his status as an former member of Live -- he's "A Live" on his own now -- but given his fondness for sincerity, it's unlikely. Kowalczyk doesn't like to obscure his point, he likes to emphasize it, a sensibility that extends to his arrangements, which never rely on one guitar when five could do.which is all the better when he's writing about big themes, which he does throughout Alive. This isn't a new wrinkle since Live always was one of U2's most earnest disciples, making big music out of big issues, to the extent of treating the personal as a cataclysmic event. They lost a bit of that rock & roll messiah complex toward the end of their run, but Kowalczyk brings it back big time here and he's the better for it, sounding reinvigorated, or at least louder, throughout the bulk of Alive. Apart from the opening "Drive," a misguided stab at Billy Corgan atmospherics, this is the biggest, boldest music he's made since Throwing Copper, lacking the overheated hard rock poses of Live's albums immediately following that blockbuster, and feeling simpler than their otherwise admirable Live finale Songs from Black Mountain. The big difference is, there aren't skyscraping hooks here, only unfettered passion and sincerity, the eternal Kowalczyk trademarks that now get to burn brighter now that he's on his own. ~ Stephen Thomas Erlewine