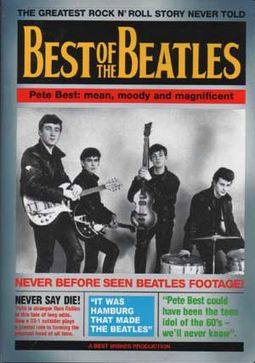 Get email alerts for The Beatles
22 ratings
Currently Out of Stock: We'll get more as soon as possible
Notify Me When Available
Add to Wishlist
Format:  DVD
item number:  HE2G
Related products:
The Beatles - Hamburg & The Hamburg Sound for $12.50
I Wanna Hold Your Hand for $12.50
Produced by George Martin for $10.20
91% recommend us!

This is the untold story of the world's most famous band's formative years, as seen through the eyes of original Beatles drummer Pete Best. See and hear how it really was in Liverpool and Hamburg at the time when the band redefined the vanguard, and how it all went horribly wrong for the 5th Beatle, Pete Best, just as they grasped the golden apple.

One of the original Beatles, Pete Best--who was famously replaced by Ringo Starr just before the quartet exploded into the spotlight--shares his vivid memories of the band's early days in this illuminating program. With a sharp memory and a surprising lack of bitterness, Best fondly recalls the band's formation and early gigs in Germany and Liverpool. Dozens of others involved in that scene are also interviewed here, and the result is a detailed and complete portrait of an important, exhilarating, and creative time in musical history.