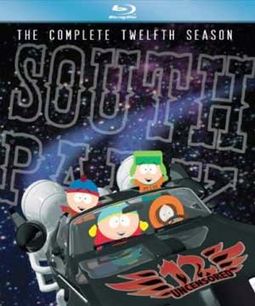 What began as a construction-paper film short evolved into a veritable pop-culture phenomenon for Trey Parker and Matt Stone's outrageous animated comedy series, SOUTH PARK. Centered on the hilarious misadventures of four potty-mouthed grade-schoolers in the perpetually wintry environs of South Park, Colorado, the series skewers the vagaries of the modern American cultural landscape with politically incorrect humor and satirical plotlines ranging from homophobia and terrorism to boy bands and talking poo. This collection presents all 14 episodes from the long-running series' 12th season, including the return of Britney Spears and a riotous plotline following Barack Obama into the White House.

All fourteen uncensored episodes from South Park's twelfth season are now available in this exclusive three-disc set. In this collection, South Park follows the new President-elect from his acceptance speech to his first official day of duty as Commander in Chief. The boys keep busy helping a pop-princess who's down on her luck, negotiating a truce for striking Canadians, and preventing giant rodents from destroying the world. For them, it's all part of growing up in South Park.