Die Hard With a Vengeance R

782K ratings
Out of Print: Future availability is unknown
Notify Me When Available
Add to Wishlist
Format:  DVD
item number:  Y4RS
91% recommend us! 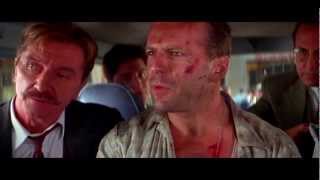 DIE HARD WITH A VENGEANCE finds director John McTiernan returning to the creative helm of the series he began in 1987 (Renny Harlin directed DIE HARD 2). For the third film in the detonative series, McTiernan creates a story line which floats from psycho terror to sonic action to interracial comedy relief. The acting is something to be marveled at as well. Bruce Willis miraculously evokes sympathy whilst playing the angry police man and Jeremy Irons' performance as the villainous Simon is reminiscent of an Eastern European James Bond megalomaniac. Samuel L. Jackson's is also worth mentioning as he gives an angry discourse in racism and then pops off one liners, both ice cold and slick.

The third installment of the "Die Hard" series. Hard-luck New York cop John McClane realizes once again that trouble always has a way of finding him.
This time it comes in the form of Simon, whose brother Hans Gruber was the villainous mastermind killed by McClane in the first "Die Hard." Simon sets out to avenge Hans's death in a rather perverse manner: periodically, he plants a bomb somewhere in New York City (a subway car or an elementary school, for example). Then he calls McClane with a difficult riddle, and a time allotment for solving it. The answer to the riddle reveals the bomb site.
McClane and Zeus, a Black shopkeeper who saves McClane's life and then is forced to join him, wind up in numerous deadly situations as they continuously struggle to save the Big Apple from Simon's bombs. But Simon has other devious plans besides killing McClane: namely to rob the Federal Reserve Bank -- which houses more gold than Fort Knox...