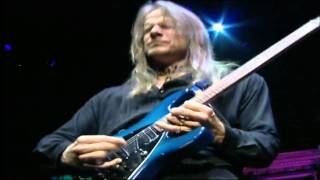 Deep Purple: Ian Gillan, Roger Glover, Jon Lord, Steve Morse, Ian Paice.
Recorded at Greg Rike Productions, Orlando, Florida.
Time has not slowed down English hard rock veterans Deep Purple, as is evident on PURPENDICULAR. Lineup changes are nothing new to Deep Purple, yet the band has managed to create high-quality material regardless of who is in the group. The classic personnel are intact here, with the exception of Ritchie Blackmore, who has been replaced by ex-Dixie Dregs and Kansas guitarist Steve Morse. It is the addition of Morse that takes the band into uncharted territory.
The shredding opening licks of "Vavoom: Ted the Mechanic" show Morse's immediate influence. The song has a fantastic bass groove, courtesy of Roger Glover. The atmospheric and melodic "Loosen My Strings," with its piano background, is a beautiful tune. Melody is an integral part of PURPENDICULAR in such songs as "A Touch Away" (a touching ballad) and "The Aviator." On "Sometimes I Feel Like Screaming," vocalist Ian Gillan does just that, unleashing his trademark wail. "Soon Forgotten" showcases Jon Lord's formidable Hammond bashing, while "Somebody Stole My Guitar" shows what Mr. Morse can do. PURPENDICULAR is an adventurous outing that explores some new directions for the band. But after one listen, longtime fans will still be seeing Purple.

Hot
Deep Purple
Knocking at Your Back Door: The Best of Deep Purple in the...
$9.98 CD Sale
Add to Cart

33%off
Deep Purple
Purple and Other Colours
$7.98 CD Sale
Add to Cart

90%off
Rhett Forrester
Gone With The Wind
$1.50 Super Savings
Add to Cart