JazzTimes: "Bubl‚ has a superb set of pipes, excellent senses of time and rhythm...[and] a laidback, comfortable style."

Get email alerts for Michael Bublé
517 ratings
Out of Print: Future availability is unknown
Notify Me When Available
Add to Wishlist
Format:  Vinyl LP
item number:  66C2H
Related products:
Michael Bublé: Christmas (Limited Edition on 180GV Red Or Green Vinyl) for $18.40
Michael Bublé: Nobody But Me for $39.40
Michael Bublé: To Be Loved [import] for $33.80
Our customers love us! 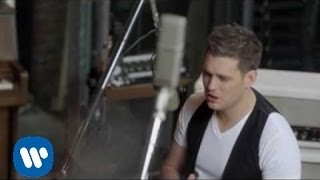 Entertainment Weekly - p.57
"[T]here's no denying the sexy-jerk swagger Bubl‚ brings to 'Cry Me a River,' which here sounds like a Bond-movie theme..." -- Grade: B
JazzTimes - p.51
"Bubl‚ has a superb set of pipes, excellent senses of time and rhythm...[and] a laidback, comfortable style."
Billboard (p.84) - "[He] holds his own on a treatment of the Ella Fitzgerald staple 'Cry Me a River' and the Van Morrison-written title track."
Record Collector (magazine) - p.86
4 stars out of 5 -- "An album of many facets and layers that keeps you engaged."

Buoyed by the popularity of the hit contemporary pop ballad "Home," singer Michael Bubl‚'s 2005 album, IT'S TIME, clearly positioned the vocalist as the preeminent neo-crooner of his generation. Easily the singer's most stylistically wide-ranging album so far, 2009's CRAZY LOVE is also one of his brightest, poppiest, and most fun. Bubl‚ kicks things off with the theatrical, epic ballad "Cry Me a River" and proceeds to milk the tune with burnished breath, eking out the drama line by line. It's over the top for sure, but Bubl‚ takes you to the edge of the cliff, prepares to jump, and then gives you a knowing wink that says, not quite yet -- there's more fun to be had. And what fun it is with Bubl‚ swinging through "All of Me," and killin' Van Morrison's classic "Crazy Love" with a light and yearning touch. And just as "Home" worked to showcase Bubl‚'s own writing abilities, here we get the sunshine pop of "Haven't Met You Yet" -- a skippy, jaunty little song that brings to mind a mix of the Carpenters and Chicago. Throw in a rollicking and soulful duet with Sharon Jones & the Dap Kings on "Baby (You've Got What It Takes)," and a fabulously old-school close-harmony version of "Stardust" with Bubl‚ backed by the vocal ensemble Naturally 7, and CRAZY LOVE really starts to come together. Then Bubl‚ goes and throws in a last minute overture by duetting with fellow Canadian singer/songwriter Ron Sexsmith on Sexsmith's ballad "Whatever It Takes." A devastating, afterglow-ready paean for romance, the song is a modern-day classic that pairs one of the most underrated and ignored songwriters of his generation next to one of the most ballyhooed in Bubl‚--a classy move for sure. The result, like the rest of CRAZY LOVE, is pure magic.