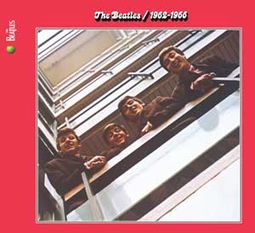 The Beatles' original 1973 compilation 1962-1966 ("Red") and 1967-1970 ("Blue") have been remastered by the same dedicated team of engineers at EMI Music's Abbey Road Studios responsible for remastering The Beatles' original UK studio albums, carefully maintaining the authenticity and integrity of the original analogue recordings. The result is the highest fidelity the catalogue has seen since its original release. Both 2-CD packages include expanded booklets with original liner notes, newly written essays by Bill Flanagan and rare photos. "Red" and "Blue" are the first Beatles compilations to be released after the band's 1970 disbandment; the popular collections each feature a selection of singles and album tracks written by the band's members.

Liner Note Author: Bill Flanagan.
Recording information: 1962-1966.
This superb compilation, often called "the red album," brings together the majority of the Beatles' hits from the early to mid '60s. Consequently, it plays like an overview of the some of the most popular and indelible rock songs of all time. From the "yeah, yeah, yeah"'s of "She Loves You" through the amped-up giddiness of "I Want to Hold Your Hand," the minor-key melodicism of "And I Love Her," and on to the chiming power pop of "Eight Days a Week" and the tweaky feedback of "I Feel Fine," these are the songs that turned the entire Western world on its ear.
The second half of the set--in addition to its phenomenal songs-- is interesting in that it charts the Beatles' move from straightforward pop toward the new chapter of rock the band would help script in the late '60s. After the expansive chords and slinky melodies of "Ticket to Ride," the band becomes alternately darkly introspective ("Yesterday") and looser and more groove-obsessed ("Drive My Car"), while trying on allegorical Dylan-inspired narratives ("Norwegian Wood (This Bird Has Flown)"), and happy-go-luck psychedelia ("Yellow Submarine"). These songs are part of our living, breathing cultural identity, and--as this collection reminds us--for good reason.

18%off
The Beatles
The Beatles and India
$16.40 Super Savings
Add to Cart