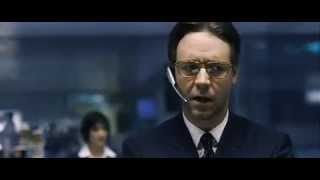 Ridley Scott (BLADE RUNNER, GLADIATOR) directs this romantic comedy based on the book of the same name by Peter Mayle. London banker Max Skinner (Russell Crowe) is a cutthroat workaholic who cares only about winning and making money. During his rise to the top, Max has forgotten the important life lessons that his favorite uncle, Henry (Albert Finney), taught him during summers at his vineyard in Provence. Estranged from Henry for years, Max is surprised to learn that his uncle has passed away and as his closest living relative, he is set to inherit the estate, La Siroque. True to form, Max tools down to Provence for a quick visit in order to assess the value of the property with dollar signs in his eyes.

Once immersed in Henry's world and the charm of La Siroque, Max begins to remember his visits and how much Henry and those summers meant to him. Other surprises--including a budding romance with fetching local café owner Fanny Chenal (Marion Cotillard) and a visit from a young American claiming to be Henry's illegitimate daughter (Abbie Cornish)--prolong Max's visit, making Provence more and more difficult to resist. Can Max be content leaving his fast-paced life in London for lazy days in a French vineyard' Or will he sell his estate to the highest bidder, memories and all, and return to his hectic lifestyle' Crowe shows his softer-side--and even throws in some physical comedy--as a man revisiting his past and considering his future. Finney is a charmer as Henry in flashback scenes (where Freddie Highmore plays a young Max) that establish his character's joie de vivre and the tender relationship shared between uncle and nephew. Didier Bourdon is Francis Duflot, the tender of the vineyard, and Tom Hollander plays Charlie, Max's best friend.

Max Skinner (Russell Crowe) is a highly successful investment expert with no time for life outside work. When his estranged uncle dies, Max inherits the vineyard in France where he grew up as a child, and his first intention is to sell the vineyard as quickly as possible. But after spending unexpected time at the Vineyard in France, he discovers a part of himself that he had lost and experiences romance and a blossoming new love affair with a beautiful French woman that changes his life forever.