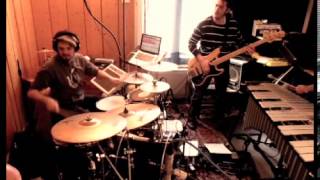 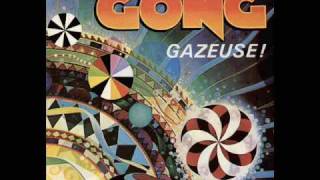 British import edition (features Allan Holdsworth on guitar).
Those happening upon Gong circa 1976 would be hard pressed to draw any connection to the Gong of just two years before. With most of the original members gone (though surprisingly, old bassist Francis Moze replaces Mike Howlett here), GAZEUSE marks the full and final transformation of Gong from spacy/psychedelic hippies to serious, cerebral jazz-rock fusion band. In a genre where technique is all, it's fortunate that all the members were extremely gifted players (and no compositional slouches either).
In addition to drummer Pierre Moerlen (who would soon emerge as Gong Mark II's leader) and mallet percussionist Mirielle Bauer, percussionists Mino Cinelu and Benoit Moerlen were added. So even though new member/future fusion demigod Allan Holdsworth contributes plenty of lightning-fast guitar work, the dominant force here is percussion. Consequently, much of GAZEUSE is funky and propulsive in a way the bulk of '70s fusion wasn't. Radio Gnome Trilogy fans may not feel at home here, but anyone with a taste for arty jazz-rock should partake of GAZEUSE's often overlooked sonic treasures.

83%off
Brownstones And Moonlight
99¢ on Sale
Add to Cart

81%off
Fattburger
Living in Paradise
$2.98 on Sale
Add to Cart