Record Collector (magazine): 4 stars out of 5 -- "[T]his record still cuts it as a great mainstream rap album of its time." 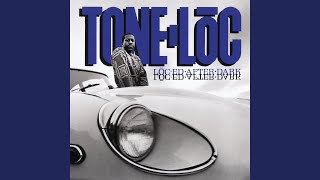 Loc'in On The Shaw (Music Video) 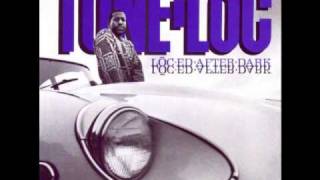 Personnel: Tone Loc, N-Dea (vocals); Arik Marshall (guitar); Lonnie Marshall, Kevin O'Neal (bass); DJ M. Walk (scratches); Dust Brothers (sequencing).
Producers: Matt Dike, Michael Ross, The Dust Brothers.
Recorded at Delicious Vinyl Studios, Hollywood, California.
A forgotten man in the rise of West Coast rap, Tone-Loc was effectively cut off from his hometown scene in Los Angeles by his unexpected pop success. Paced by the singles "Wild Thing" and "Funky Cold Medina" -- both co-written by a pre-fame Young MC -- and some of the earliest productions by the legendary Dust Brothers, Loc's debut album, Loc-ed After Dark, became the second rap album to top the pop charts, following the Beastie Boys' Licensed to Ill. Loc's distinctively rough, raspy voice and easygoing delivery made him an appealing storyteller, but he was aiming for the streets more than the pop charts. So there's the occasional profanity, the stalker-tinged title track, and "Cheeba Cheeba," which made waves at the time as one of the earliest pro-marijuana raps on record (of course, this was before Cypress Hill, and Nancy Reagan's "Just Say No" campaign was still fresh in the public's mind). The minor singles "I Got It Goin' On" and "On Fire" (the latter the first record ever released on Delicious Vinyl) are both pretty good, but some of the album's momentum is wasted on some fairly standard MC boasts (Loc has much more personality than he does lyrical technique). Even if Loc-ed After Dark is erratic, though, it still deserves more respect than it's generally accorded. ~ Steve Huey