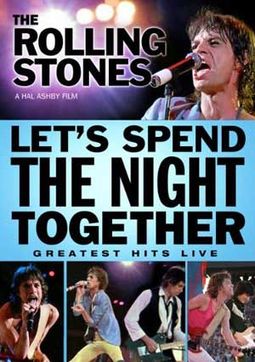 In the tradition of Hollywood directors taking on the task of documenting rock & roll events--like Martin Scorsese with THE LAST WALTZ or Jonathan Demme with STOP MAKING SENSE--Hal Ashby's LET'S SPEND THE NIGHT TOGETHER is a record of the Rolling Stones' 1981 U.S. tour. Although it was filmed at just three stops, all large outdoor venues, it beautifully captures the spirit of the shows and the hard work that goes into staging a Stones concert. The Stones themselves don't break new ground in personal revelations, but they do live up to expectations. Charlie Watts and Bill Wyman tend to fade into the background, Keith Richards is otherworldly, and Mick Jagger struts and poses. But Ashby wanted to show the vastness of the enterprise, not just the performers. His use of sweeping helicopter shots of the crowds is balanced by equal attention to the small details of the work of the roadies and technicians. The songs are familiar, recorded in stereo surround sound, and performed with the electric intensity expected of the Rolling Stones, arguably the world's greatest band. Ashby also opens things up by including a variety of newsreel footage collected over the 20 years the band has been together, some of which, including burning Buddhist monks in Vietnam, still startles, giving a historical feel to an otherwise fairly straightforward concert film.

The Rolling Stones
Live at the Max
$13.60 Super Savings
Add to Cart

48%off
The Rolling Stones
Rare and Unseen (DVD)
$5.20 Super Savings
Add to Cart