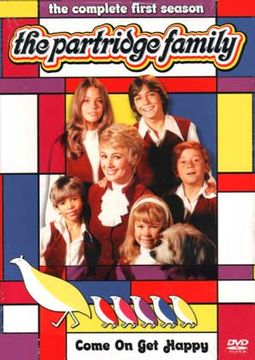 It's TV's favorite family of rock 'n' rollers, who hit the road in their groovy bus and turn the world on to catchy pop songs such as "I Think I Love You," "I Woke Up In Love This Morning" and "Somebody Wants to Love You."

The Partridge Family's six members feature mom Shirley (Shirley Jones) and her five kids: Keith (David Cassidy), Laurie (Susan Dey), Danny (Danny Bonaduce), Tracy (Suzanne Crough) and Chris (Jeremy Gelbwaks). And who can forget the Partridge's frequently exasperated manager, Reuben Kincaid (Dave Madden), who would become an important member of their family whether he liked it or not? Enjoy the complete first season that introduced us to our favorite TV family of all time!

If one show epitomizes many aspects of American life in the early '70s, it's THE PARTRIDGE FAMILY. The show's portrayal of the excitement of a rock & roll lifestyle--however toned down--was quintessentially representative of its time. The family of six is headed by mom Shirley (Shirley Jones), a recently-widowed supermom who is short of financial resources. Jones's real-life stepson David Cassidy played teenaged stepson Keith, while the rest of the family was comprised of Laurie (Susan Dey), Danny (Danny Bonaduce), Chris (Jeremy Gelbwaks), and Tracy (Suzanne Crough). In the first episode, the family stumbles into making a hit song, gains a manager through Keith's diligence, and go on tour in an old painted schoolbus. Their first venue is in Las Vegas opening for Johnny Cash, and the family has to combat their stage fright. The season sees the family learning how to deal with their newfound fame, with Keith's heartthrob status getting the best of him and Danny considering a solo career. The group also plays at a feminist rally, has a nasty encounter with a family of skunks, and 10-year-old Danny gets drafted by accident. Other episodes include "This is My Song," "Mom Drops Out," "Soul Club," and "Not With My Sister, You Don't."