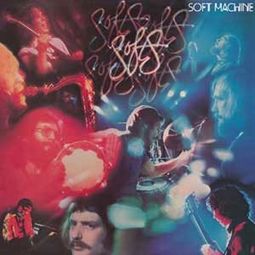 At this point in the band's history, Soft Machine's lineup might raise the question of Theseus' paradox: if all the pieces of something are replaced, bit by bit over time, does the identity of the original something still remain? On Softs, Mike Ratledge, the only original bandmember present on Bundles, the group's preceding Harvest LP, was relegated to guest status, contributing synthesizer to only two tracks, "Song of Aeolus" and "Ban-Ban Caliban." Otherwise, keyboard duties fell completely to Karl Jenkins, who joined the group prior to the recording of Six and had gradually taken over the conceptual reins as the Softs finished their tenure with Columbia and moved over to Harvest. On Softs more than ever before, Soft Machine was Jenkins' band; he composed fully seven of the LP's 11 tracks, making the album a vehicle for his own artistic conception. And yet, as Soft Machine albums go, this one is just fine, thank you. Jenkins had always put his own personal stamp on the material he wrote for the band, but he also retained elements of a Soft Machine style that emerged around the time Ratledge began penning LP side-long opuses on Third: a marriage of modalism and minimalism with memorable themes in layered counterpoint and an occasional backdrop of rippling, echoey overdubbed electric keyboards, giving the music a trippy, trance-inducing quality. Nimble keyboard and reed solos were also an important element of the Soft Machine sound, although, as the group entered its Harvest fusion period, they tended to take a back seat to the work of fleet-fingered electric guitarists, first Allan Holdsworth on Bundles and then John Etheridge here.
With Etheridge proving that Holdsworth wasn't England's only blindingly fast fusion guitar riff-meister, and with new saxophonist Alan Wakeman being a somewhat heftier reedman than Jenkins, the Softs lineup was plenty strong enough in the soloing department, so Jenkins could concentrate on overdubbing an arsenal of keyboards to give the music its overall structure and mood. Meanwhile, the Roy Babbington (bass) and John Marshall (drums) rhythm-section team, intact since Seven, was as fine as ever, kicking the band into overdrive at the drop of a hi-hat. While Softs has plenty to satisfy the Canterbury and jazz-rock fusion fan, another stylistic element -- new age -- can be heard blowing in with the synthesized wind and strings of the slow and lovely "Song of Aeolus." A precarious balance is usually maintained and the music keeps its footing in jazz-rock, although Softs certainly has more polish than grit. Moments of subtlety and understatement, like the pastoral soprano saxophone and acoustic guitar duet of the opening "Aubade" and Etheridge's folk-jazz duet with himself on the album-closing "Etka," are balanced by passages of high drama: the multitudinous layers of guitars and keyboards piled onto the closing of "The Tale of Taliesin" might suggest the Beatles' "I Want You (She's So Heavy)" coda through a widescreen '70s fusion lense. Elsewhere, the careful buildup and breakdown of lovely themes on "Out of Season" and the insistent groove of "Ban-Ban Caliban" are notable highlights. Softs is adventurous listening, yet accessible and engaging enough to have broad appeal, and its stylistic links to the past maintain Soft Machine's distinctive identity -- even if this particular machine is constructed of replacement parts. [Some good selections from Softs can also be heard on Tales of Taliesin: The EMI Years Anthology 1975-1981, which also includes selections from Bundles, Alive & Well: Recorded in Paris, and Land of Cockayne.] ~ Dave Lynch