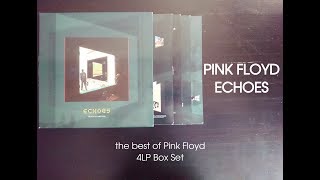 Entertainment Weekly - 11/16/01, p.133
"...A smartly nonchronological, cross-fading song sequence flitting between the butty-Syd, ranting-Rog and spacey-Dave eras..."
Q - 12/01, p.153
4 stars out of 5 - "...Captures the essence of one of our major rock bands, from Barrett to Waters to Gilmour as CEO, and distilling this 30 years war into something coherent. It certainly has a pop..."
Mojo (Publisher) - 12/01, p.108
"...Beautifully remastered and carefullt sequenced, allowing unexpected juxtapositions to throw up nice effects..."

Pink Floyd: Roger Waters, David Gilmour, Nick Mason, Richard Wright, Syd Barrett.
Producers inlcude: Pink Floyd, Michael Kamen, Bob Ezrin, Joe Boyd, Norman Smith.
Compilation producer: James Guthrie, Pink Floyd.
Digitally remastered by James Guthrie.
Personnel: David Gilmour (guitar); Richard Wright (keyboards); Nick Mason (drums).
Photographers: Rupert Truman; Sam Brooks.
Through their long history, Pink Floyd moved through psychedelia, prog-rock, space-rock, and more, emerging as pioneers in all of those styles. This two-disc compilation takes on the formidable task of creating a definitive Floyd collection. Though there's no chronological running order to give a sense of the group's development, there are plenty of key tracks from all the eras of Pink Floyd's career. We're given a healthy dose of material from the band's psychedelic '60s period, when they were spearheaded by the ultimate acid-damaged genius Syd Barrett (the loopy "Bike," the otherworldly "Astronomy Domine"). The most overtly progressive tendencies of '70s Floyd are aired on the glorious epic "Echoes," whose suite-like construction shows off both the band's technical facility and orchestration skills.
Naturally, there are some cuts from the band's watershed album DARK SIDE OF THE MOON, one of the best-selling LPs of all time (the gospel-tinged "The Great Gig in the Sky," the near-funky capitalist plaint "Money"). Hardcore Floyd fans might object to the number of songs from the post-Roger Waters era, but even these less-celebrated tunes work in the overall historical context. While it's easy to quibble about the absence of various Floyd favorites (no "Interstellar Overdrive?"), there's so much crucial music on this collection that it's impossible to come away from it without a strong sense of what Pink Floyd such an important band.

Pink Floyd
A Saucerful of Secrets
$13.70
Add to Cart