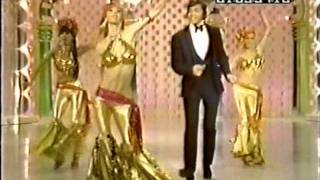 Personnel: Engelbert Humperdinck (vocals).
With Engelbert Humperdinck's Decca Records contract coming to an end in 1974, the label compiled His Greatest Hits. The American version (released on Parrot) contained ten tracks, eight of them being Top Ten hits on either the pop or easy listening charts between 1967 and 1969, and the remaining two being "Quando Quando Quando" and "Spanish Eyes." Humperdinck had scored plenty of other easy listening hits that could have been included, but instead, all but one ("I'm a Better Man") of his Top 40 pop-chart entries were included here, among them such signature songs as "Release Me (And Let Me Love Again)," "A Man Without Love (Quando M'Innamoro)," and "Les Bicyclettes de Belsize." Those were the songs that established Humperdinck as a contemporary romantic balladeer with a European flavor, setting the pattern for his subsequent career. A more complete compilation of his hits, especially in the CD era, would be welcome, but the basic recordings that made him a star are included on His Greatest Hits, and this may have helped the album stay in print over the years. ~ William Ruhlmann