Mojo (Publisher): 3 stars out of 5 -- "The opening songs whisk us from joyful doo wop to the subtler baion rhythms of Spanish Harlem..." 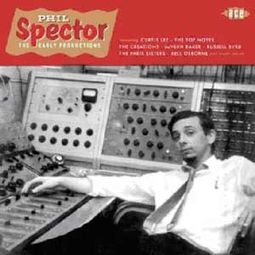 Uncut - p.106
4 stars out of 5 -- "[T]he young Spector's growing confidence and ever more indelible fingerprints are all over these 28 examples of his formative talent."
Mojo (Publisher) - p.113
3 stars out of 5 -- "The opening songs whisk us from joyful doo wop to the subtler baion rhythms of Spanish Harlem..."

Phil Spector really hit his commercial and artistic stride with the Crystals' "He's a Rebel," but the flurry of hits it ignited had been preceded by almost five years of fitful attempts to find a foothold in the record industry. There have been official and unofficial attempts to anthologize Spector productions from the late 1950s and early '60s that didn't appear on the Philles label. But this 28-track compilation of material he produced or was otherwise strongly affiliated with is the most thorough and professional. Even Spector fans should be warned, however, that the quality's highly uneven, and the anthology's ultimately more of interest to historians investigating the producer's roots than it is to the general fan, although it does have a few good hits. Far and away the best of these are Ben E. King's "Spanish Harlem" and, though a few pegs lower, the Paris Sisters' "I Love How You Love Me," Gene Pitney's "Every Breath I Take," and Curtis Lee's "Pretty Little Angel Eyes." Much of the rest, frankly, is surprisingly mediocre, and often quite derivative of other trends of the era, whether teen idol pop, R&B, soul, or doo wop. Now that you've been warned, if you have a deep interest in Spector or the era in general, there are some interesting if not incredibly entertaining oddities here, like a 1963 teen idol single made by future Byrds producer Terry Melcher under the name Terry Day; the original version of "Twist and Shout," by the Top Notes; and LaVern Baker's "Hey Memphis," an "answer" record to Elvis Presley's "Little Sister." Here and there, you can also hear faint echoes of the approach for which Spector would become known, like Obrey Wilson's "Hey There Mountain," a nice soul-pop ballad, and Melcher/Day's orchestrated "I Love You Betty." From the late '50s, there's also a Duane Eddy-ish instrumental by Spector himself (under the pseudonym Phil Harvey) and a pretty haunting ballad by his first group, the Teddy Bears, "You Said Goodbye" (though it's obviously similar to their smash "To Know Him Is to Love Him"). "To Know Him Is to Love Him" itself, by the way, isn't here, and though it's easily available on countless other compilations, its presence would round out this history of his beginnings (as would a few more songs by the Paris Sisters) for those who might not happen to be intimate with Spector's history. After reading Ace's typically lengthy liner notes, however, both newcomers to Spector's legacy and committed Spector fans will come away with a lot of hard-to-find information. ~ Richie Unterberger

35%off
The Contours / Dennis Edwards
Just a Little Misunderstanding
$16.98 on Sale
Add to Cart

Sounds of the Unexpected: Weird & Wacky Instrumentals from...
$15 Super Savings
Add to Cart

35%off
Funkadelic
Funkadelic [Bonus Tracks]
$10.98 on Sale
Add to Cart