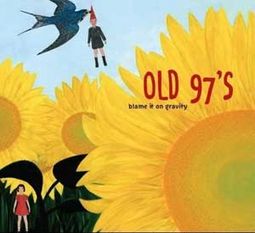 Get email alerts for Old 97's
Currently Out of Stock: We'll get more as soon as possible
Notify Me When Available
Add to Wishlist
Format:  Vinyl LP
item number:  633VA
91% recommend us!

Featuring "Dance With Me" and "My Two Feet."

Rolling Stone - p.72
3.5 stars out of 5 -- "It's a perfect mission statement form four Texans raised on the Beatles and Johnny Cash in equal measures, whose shiny melodies, and fatalistic character studies, do their forefathers proud."
Spin - Vol. 116, No. 2008-06-01
3.5 stars out of 5 -- "Their seventh studio album bucks and chugs, balancing the quartet's original alt-country impetus with Rhett Miller's love of power pop."
Uncut - p.98
3 stars out of 5 -- "The tracks explode with immediacy, as Rhett Miller's detail-rich narratives mesh with the knowingness of his singing. The players' tight grip on the material reveals a first-rate band in peak form."
CMJ
"Here, budget-poor anthems are buried in analog-studio crud, dusty mixing board fuzz and desert-oasis echo. They've never sounded more Texas."
Paste (magazine) (p.69) - "Miller, wit firmly intact, contributes 11 of his smartass, lovelorn pop nuggets on this record, and bass player Murry Hammond piles on with a letter-perfect Buddy Holly tribute."

Coming nearly four years after 2004's rough-edged DRAG IT UP, BLAME IT ON GRAVITY is slightly smoother-sounding, but still nowhere near slick. Rhett Miller and company, as always, are blending country twang and a rock-&-roll heart on their seventh album, but overall these 13 tracks lean a bit more towards the latter. The straightforward pop of "Rise" sits comfortably alongside the Latin-tinged shuffles of "She Loves the Sunset" and "Dance With Me," and the rollicking gallop of "Early Morning" is a nice balance to the winsome jangle pop of "This Beautiful Thing." Other highlights include the lengthy pure -country ballad "The Color of a Lonely Heart Is Blue" and the sparkling pop of the anthemic "My Two Feet."