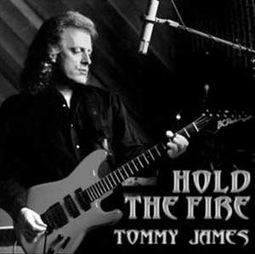 Outside of repackages and live albums, original music from Tommy James is far too limited for an artist of his stature. 1980s Three Times in Love contained the sublime title track which hit the Top 40, while 1990s Hi-Fi on Aegis Records and 1995's A Night in Big City remain treats for hardcore fans. Hold the Fire deserves a better fate, and the team-up of James with James "Wiz" Wisner leads to some very creative moments. "Isn't That the Guy" has a great hook, a terrific hook, and some modern sensibilities, but may be a bit too avant-garde for adult contemporary radio. "It Keeps on Goin' " reveals the Tommy James his true fans appreciate, investigating pop boundaries and keeping the music different from track to track. One of the best titles here is the "bonus track," "I Love Christmas" which deserves a place next to Darlene Love's "All Alone on Christmas" and other latter day seasonal delights. "Ordinary Girl" is a strange hybrid of Elton John's "Hey Jeannie" meeting David Gates'
"Goodbye Girl," and on that level it works. "Angels & Strangers" begs the question of who wrote Lou Reed's "Sweet Jane" riff first? Those "Crimson & Clover" chords are recycled here prior to a soaring chorus. Why James decided to re-record "Megamation Man" from the A Night in Big City rock opera is anyone's guess -- the CD-single from the '90s already gave us two edits. What is understandable is "Sweet Cherry Wine," the remake of his Top Ten anti-war anthem from 1969, issued as a single a few months prior to Hold the Fire's release. Almost 40 years later the song is just as significant, but the slowed down rendition is not going to get the point across as effectively as the original. It's a missed opportunity, and is indicative of the album; this is a very good record from a great artist who delivered great albums whether they sold or not. The title track works, as does much of the music here, and it is great to have the pop maestro back. Where Lou Reed, truly James' underground doppleg„nger, kept releasing product over the decades, the world has not yet had enough of Tommy James' creativity. If Hold the Fire marks his rebirth, it's a good first step. ~ Joe Viglione